Balchik is not a place that is well known or famous. However, the world turns in mysterious ways and I found myself here in this old town on the coast of the Black Sea.

At first look, the city does not seem to offer much but the truth is that if you are willing to look closer you can discover lots of stories and plenty of beauty. 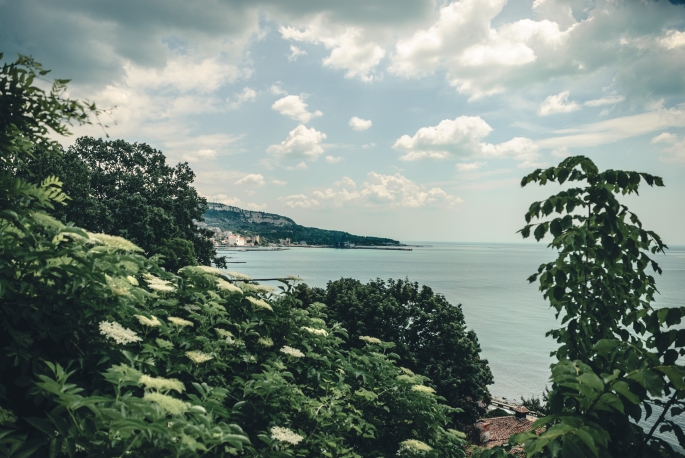 One of the people who saw the beauty of this city was Princess Marie of Edinburgh, more commonly known as Marie of Romania (Marie Alexandra Victoria). She  traveled a lot and when she first visited in 1921 she liked the nature and mild climate of the city so much that she decided to build her royal summer residence right here on the coast of Balchik. Queen Marie was born in England and was a granddaughter of British Queen Victoria. She also had Russian aristocratic blood flowing through her veins from her mother, Maria Aleksandrovna.

She was only seventeen when she married Ferdinand of Romania, who was 10 years older. The marriage was arranged for the political reasons, so rather than being founded on love, it was based purely on respect and companionship. Marie instead looked for love in affairs with different important political figures of the time. Marie had 6 children, allegedly with different men. The first few years were very hard for her but soon she realised how much she could actually do for her new country. She became very politically active and a Romanian patriot. During the First World War, she volunteered as a Red Cross nurse to help the sick and wounded. She was also an artist and big supporter of the arts. She became very popular and loved by the people of Romania.

In 1924 Queen Marie employed two famous Italian architects and builders, Amerigo and Augustion. Together they created the Queen’s secret paradise, which she named “quiet nest”, using all of the knowledge and inspirations from her travels around Europe and the Middle East. When travelling, the Queen came to know the Baha’i Faith and she was the first Royal to declare herself to Baha’i Faith. They believe in the unity of God, religions and in a unity of mankind. Religion became very important for her, so she made sure that all of these beliefs were incorporated into the gardens and architecture. You can find here elements from Muslim, Christian and other religions and beliefs. It took almost eleven years to construct and arrange everything but the results are spectacular! 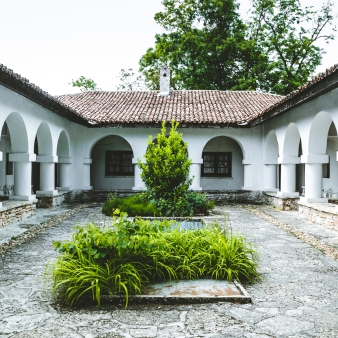 Soon after ‘The Palace’ was finished in 1937 they started with the construction of numerous individual villas so that all of the guests and visitors could also enjoy the beauty that was created. They are all in the same style, which is a mix of both traditional Bulgarian and Arabic influences and they are scattered all around the park.

For garden arrangements, Queen Marie employed one of the most famous garden specialists, Jules Jany from Switzerland. He collected exotic species such as mimosas, magnolias, roses and lilies, then arranged them like a true artist in floral compositions. In the gardens, there are also a lot of hedges and more than 150 species of trees, climbing plants and bushes. Also, we cannot forget about the second largest collection of cacti in the world that is also located in the garden.

Marie lost her husband in 1927 before the Palace was even finished. She mainly spent her years as a widow here, walking around the garden, writing books and arranging flowers.

It seems like here she finally found peace and love. It was her last wish that her heart would stay here in Balchik, so after her death in 1938 she was buried next to her husband in the Arges Monastery but her heart was left here in a cloister at the Palace. However, in 1940, when Balchik and the rest of Southern Dobrudja were returned to Bulgaria, Queen Marie’s heart was transferred to Bran Castle.

When walking through the garden I feel like I’m taken back in time. There is a strong presence of peace and mystery. You can really feel that all of this was made and used with love. This place is like a crown jewel perfectly frozen in time, in the middle of forgotten and abandoned scenery.

Alja, 26, coming from Slovenia. Student of life, always yearning to learn, to improve myself. Lover of arts, appreciating beauty and esthetics. I studied cultural studies and anthropology and now I am here to learn about new cultures, meet people​ and to hear new storeys. View all posts by Alja

3 thoughts on “Leaving Your Heart in Balchik”

Our goal is to present and contribute to the development of contemporary film art in Bulgaria, Europe and the world, creating a favourable environment and platform for young filmmakers and established professionals.